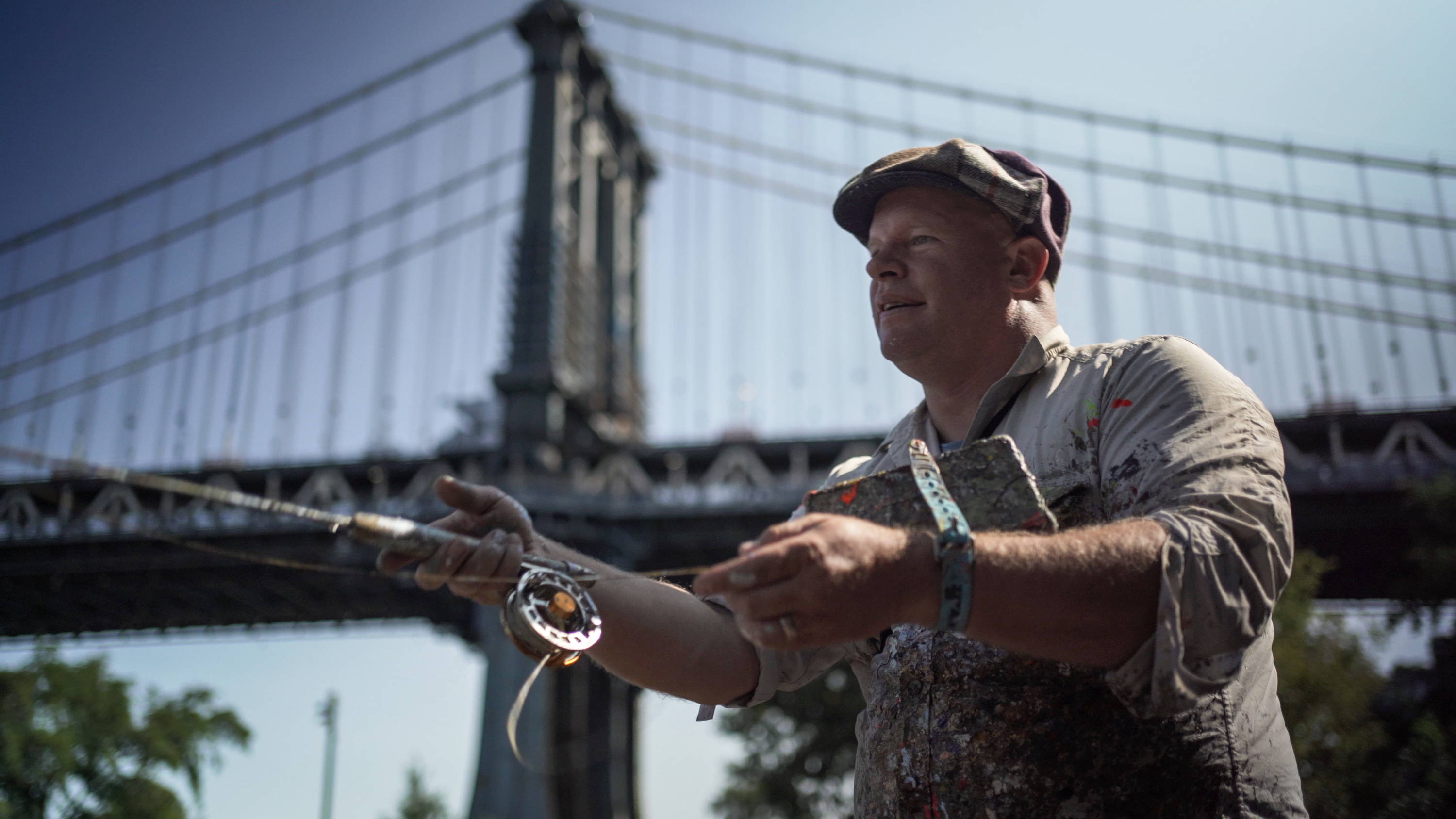 If you ever find yourself on the river banks in Montana, keep an eye out for a solitary figure, casting his rod over and over again. Who may appear to be an ordinary angler is Ben Miller, the fly cast fishing artist whose work traces the story of the river.

The son of a logger, Ben Miller was raised in Darrington, Washington, a small town situated between the banks of the Sauk River and the base of Whitehorse Mountain. His father - who had camped along the river himself as he ferried logs of timber downstream - introduced Ben to river fishing at an early age. Driving across the bridge on their way home, his father often asked Ben to read the river and determine the conditions for their weekend fishing. Developing a keen eye, he could tell with just a glance if they needed bait or lures or if it were too flooded to fish. 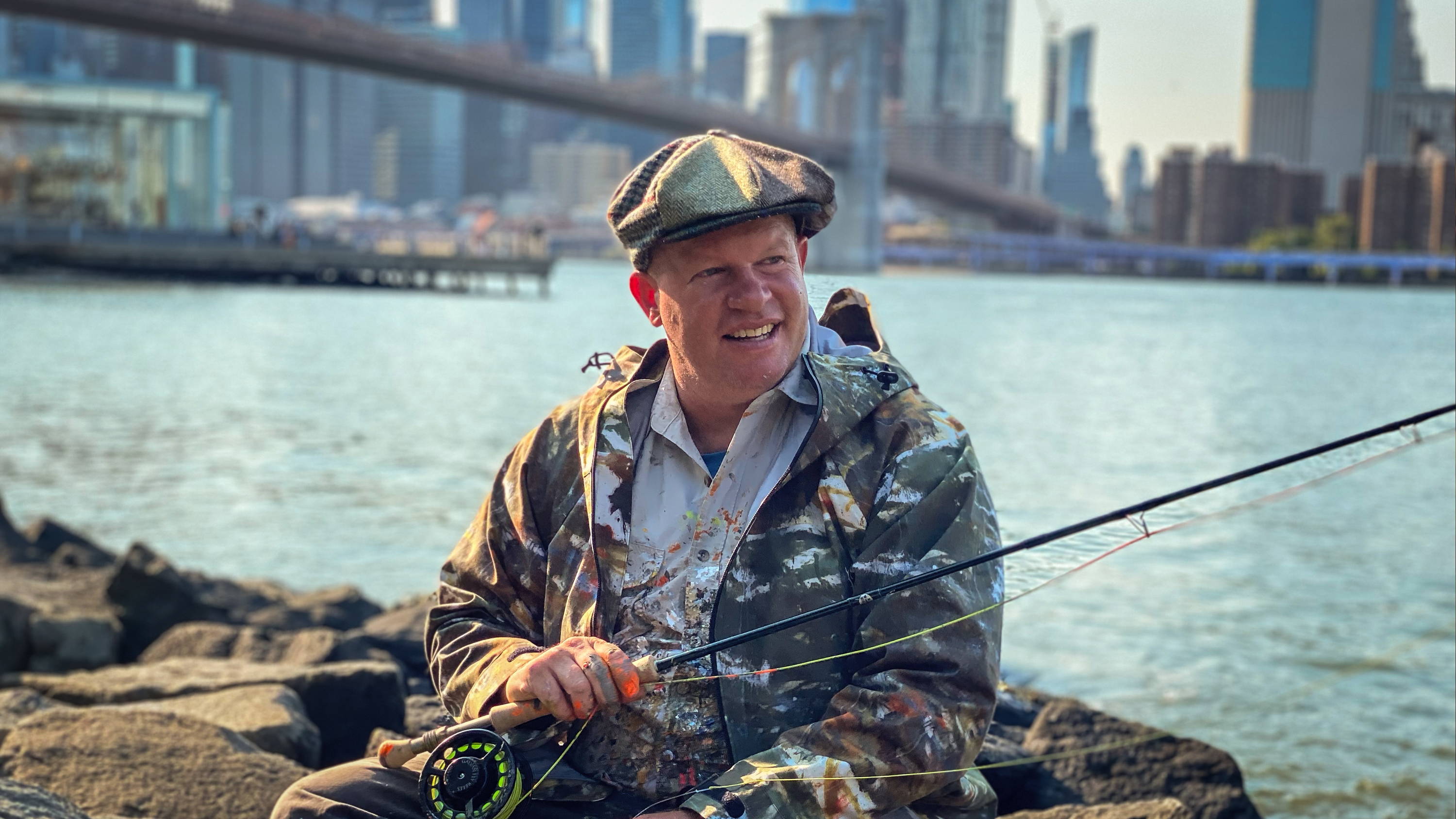 The river came to represent a meeting place of reality and myth. Ben devoured books like Tom Rosenbauer’s “Orvis Guide To Reading Trout Streams” and began learning more and more about the world that occupies the space between the surface and the riverbed. Ben adds, “Looking into a stream, we find comfort or excitement or intrigue as to what that river might hold.

I think what drives people to the river is the mystery - the unpredictability of what might come out of those waters. I think that's captivating to the imagination.” The beauty and constantly changing nature of the river are visceral. It touches all five senses, heightened by the ever-present danger of rip currents and treacherous boulders underfoot.

Pinpointing the best areas for trout and reeling them in became an obsession, although he made sure only to catch and release, preserving his quarry to help the river continue thriving. To Ben’s eyes, the act of fishing is more than a sport; it is the forging of a pathway between two realities. The terrestrial, above-surface existence contrasts with the underwater realm - each holding an entirely separate modality. Ben describes the act of fishing as “casting a very thin line through the density in which we exist, into the density that the trout survive on at the very end.”

More than just connecting, this pathway embodies humanity’s impulse to resolve its relationship with untamable nature via control, divulging a more profound truth of human existence. 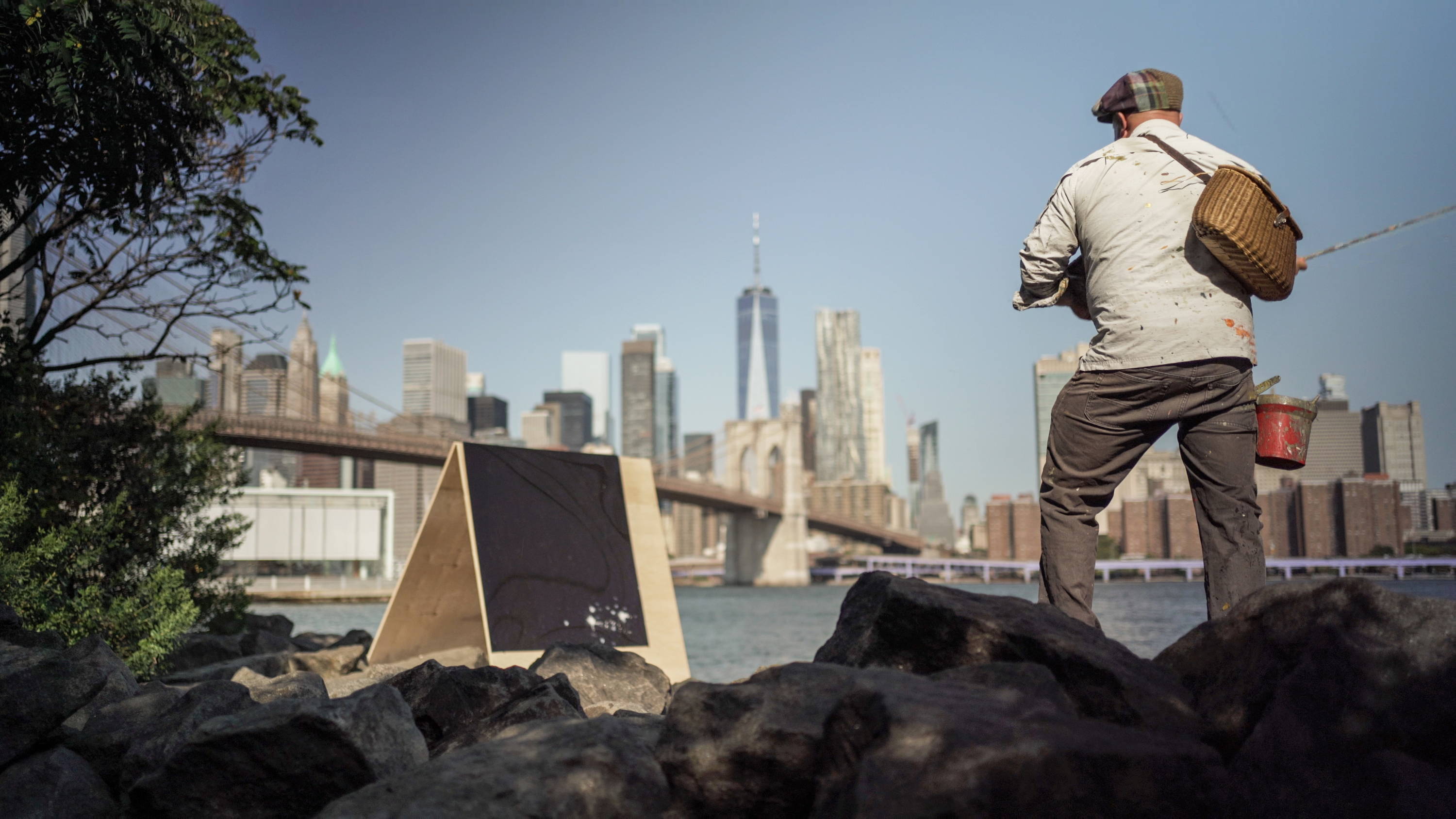 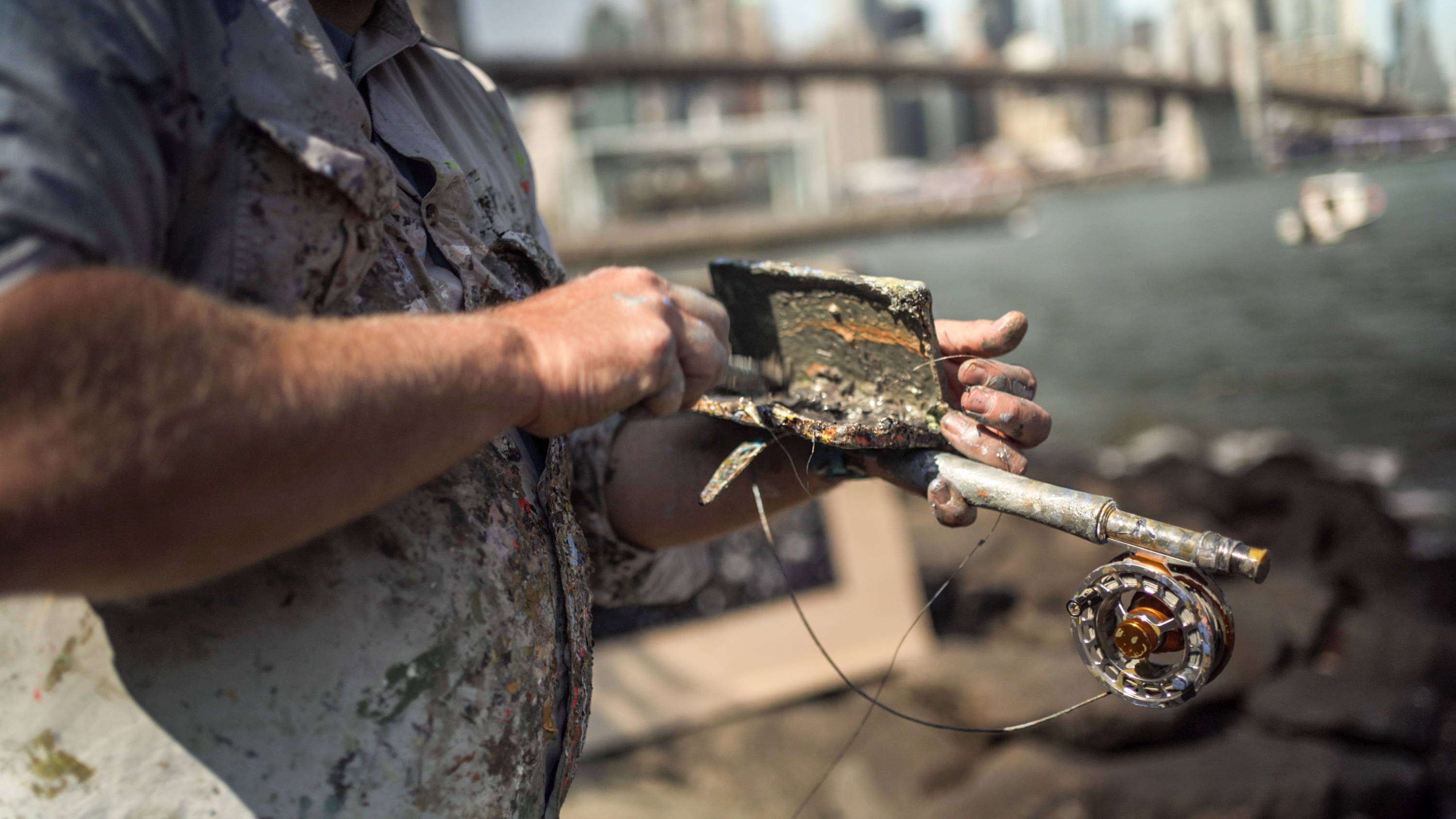 Ben began teaching after graduating from college with an art major and an education degree. Throughout his career, he developed his art - hand-brushed, oil-on-canvas painting of trout darting through the river. He also began to change his conception of an artist, saying, “If you had all your art in one shed that was burnt to the ground, it would be a travesty. Maybe that art was good, or maybe it wasn't. It doesn't matter. It’s only important that the artist had something to say. And now that it's lost the world, that voice will never be heard.” Realizing that he needed to share his unique perspective on rivers with the world, he came up with fly cast painting - a new art form that retained his subject while executing through a new method.

Quickly discovering that store-bought flys deteriorate after only a couple of casts, Ben began crafting his own. His first experiments began by dabbing paint onto a sock before diversifying into more varied materials: knotted hemp, feather, nylon strips, and looped gobs of yarn. The reel becomes the brush with fly cast painting, where paint-soaked custom-made flys strike the image. At once highly innovative while also falling into the tradition of renaissance artists who crafted their tools, these flys allow Ben to capture the essence of the river. Ben states, “Making these flys, the first thing that comes to mind is aerodynamics. I want people to see movement
and depth in the painting - side to side and vertical motion - like you’re standing there.” Each fly is named: Worm, Major Tom, Anarchy Beetle, and Bolderag, among others. Ben chronicled detailed depictions of these flys and their purpose in an illustrated compendium as a companion piece to the fly cast paintings. 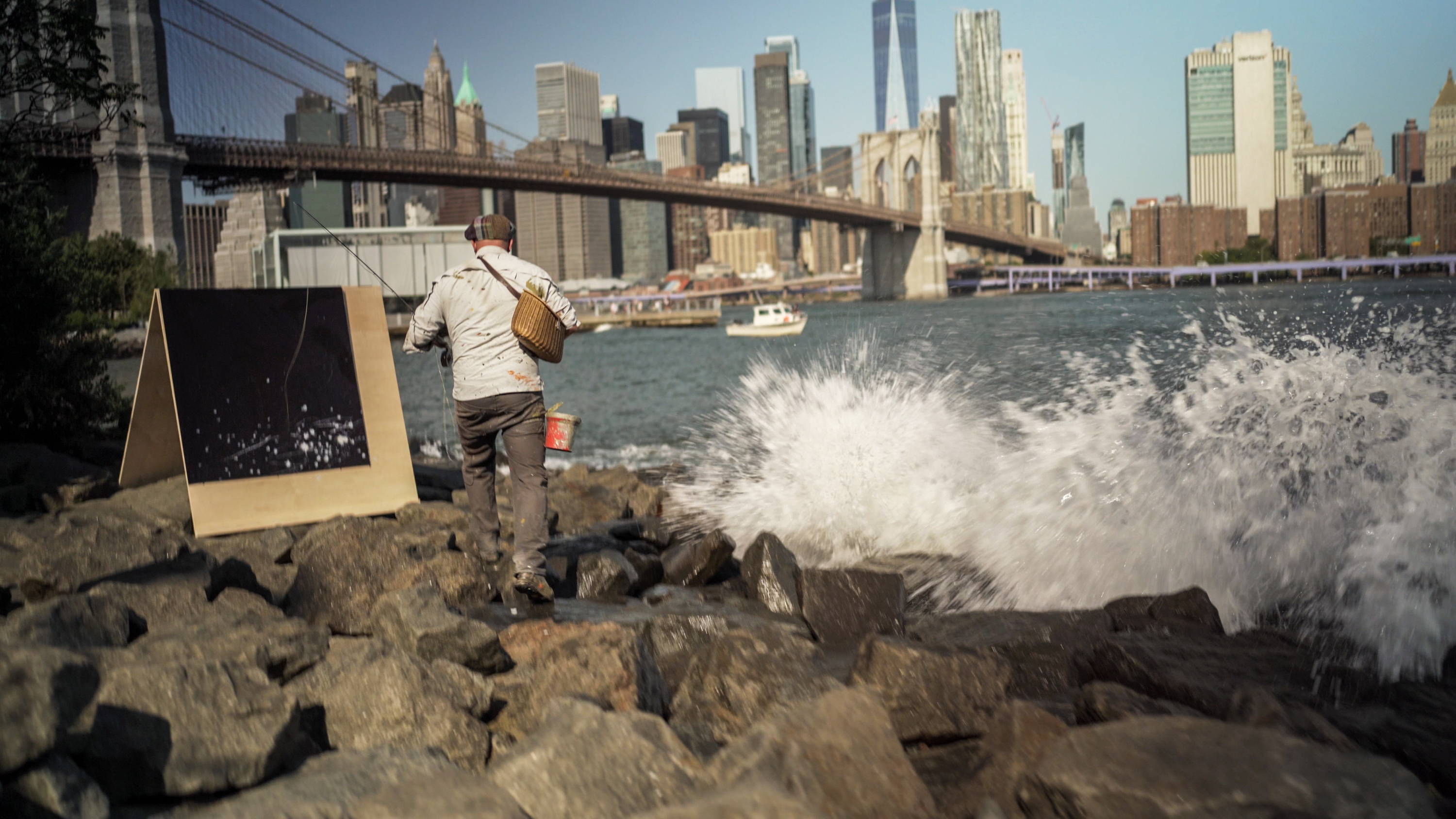 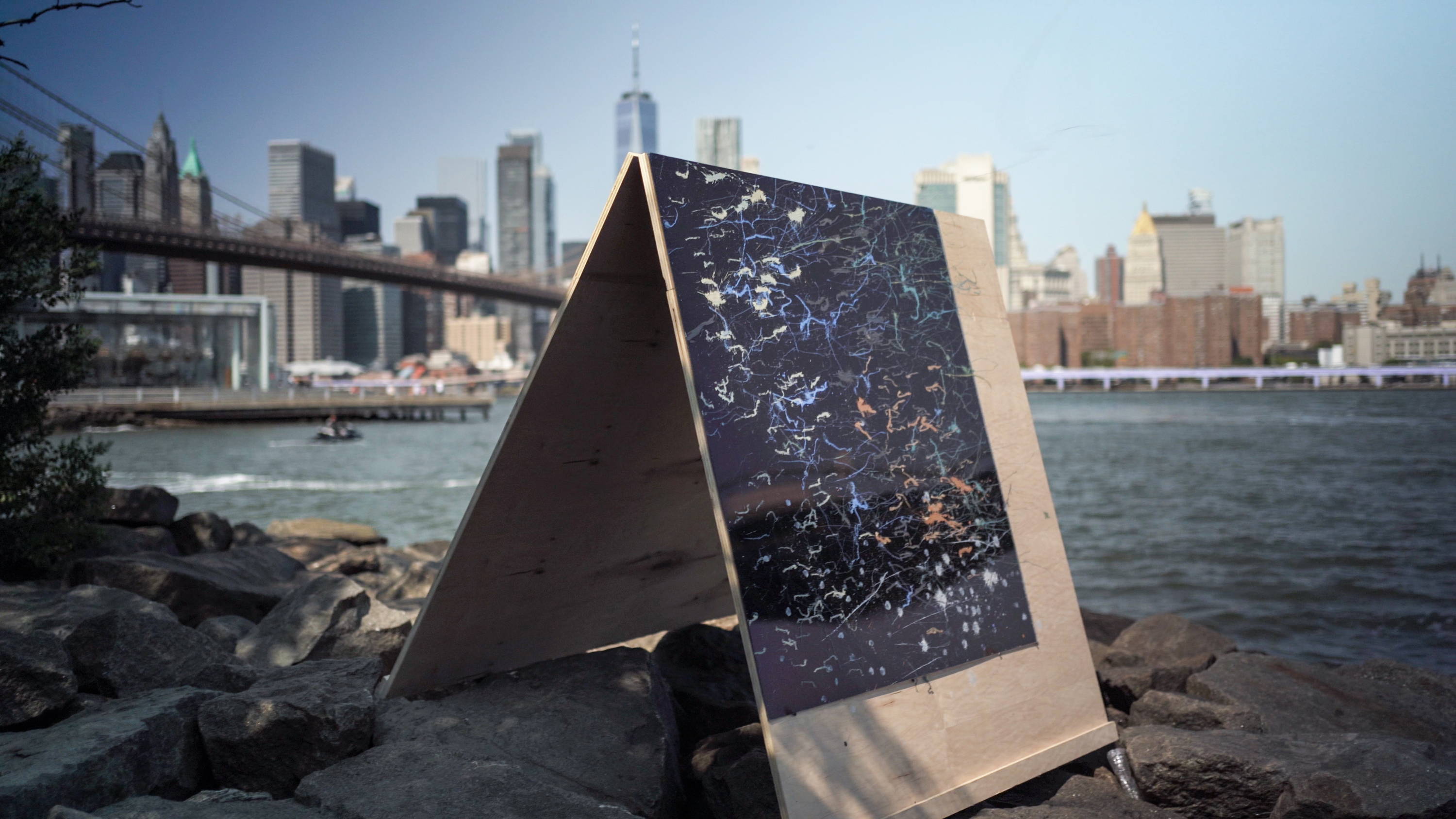 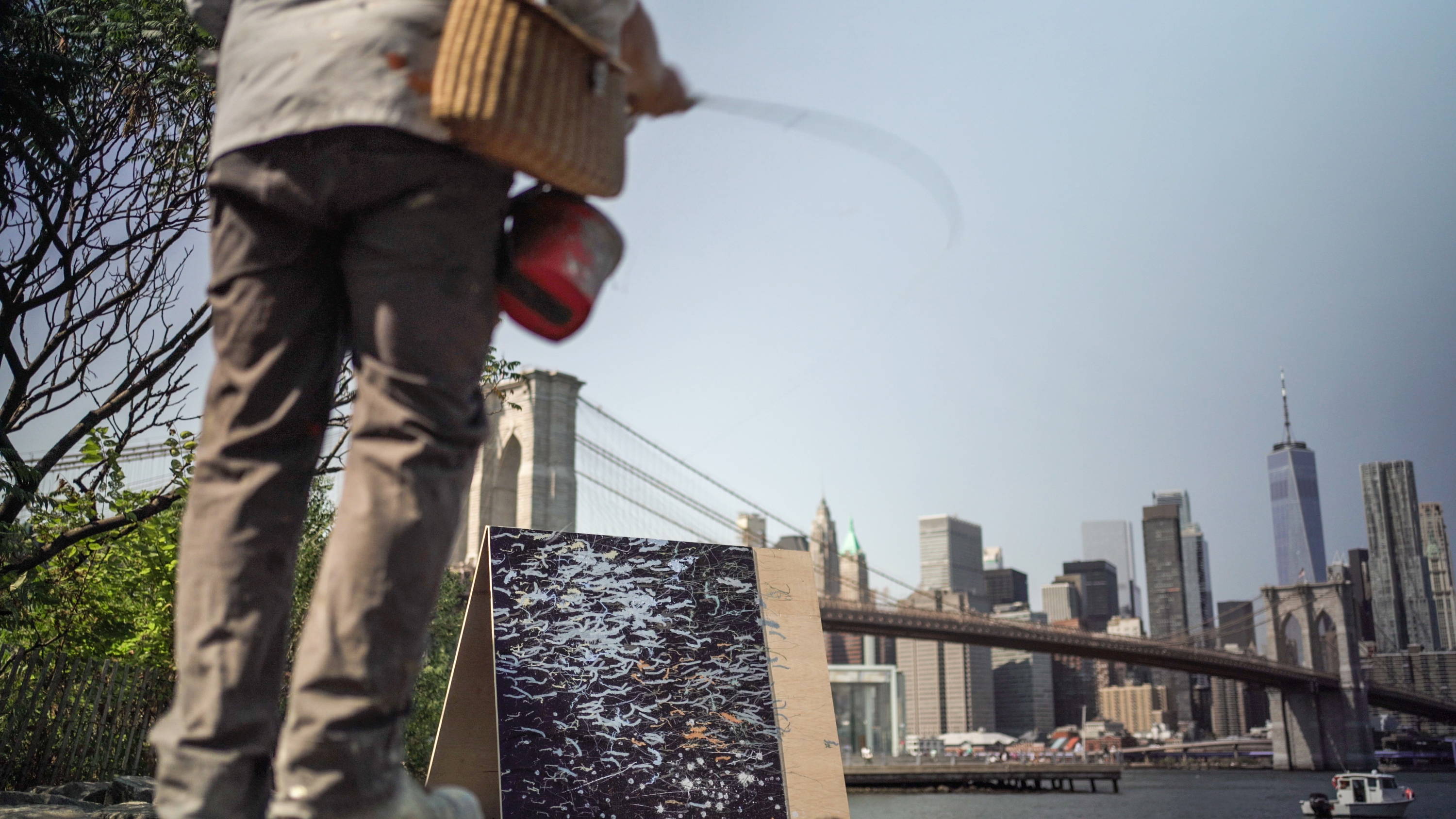 Much of Ben’s fly cast painting work is en plein air, conducted in Montana on staked-out positions overlooking rivers (frequently the Yellowstone, Taylor, or Ruby Rivers), where he casts his flys onto a transparent sheet of Plexiglass for hours on end. When asked about influences when developing his technique, he states, “When I’m starting I think of Egon Scheile and his use of line, how he painted the figure. I create lines that are engaging and repetitive and suck you in. I finish a painting with the force of these thick layers of paint that are so raw, drawing on [Kazuo] Shiraga and his idea of power.” With each piece requiring hundreds of casts, his technique must be sharply precise. Ultimately he admits, “There are only three things, the river, the painting, and the palette. To preserve the purity of the experience, all three should be matching up.”

This experimentation culminated in Ben Miller’s Endangered Rivers Project, a collection of fluid, forceful works that capture the strength and fragility of the river itself. In addition to the physical work, Ben has teamed up with (Not)Gagosian to create a digital component, feeding individualized brush strokes into an algorithm that correlates real-time river conditions to an electronic display. This display depicts the ever-changing nature of the river and its susceptibility to its surroundings. Half of the proceeds from the sales of these works will go to local charities dedicated to the preservation of rivers. 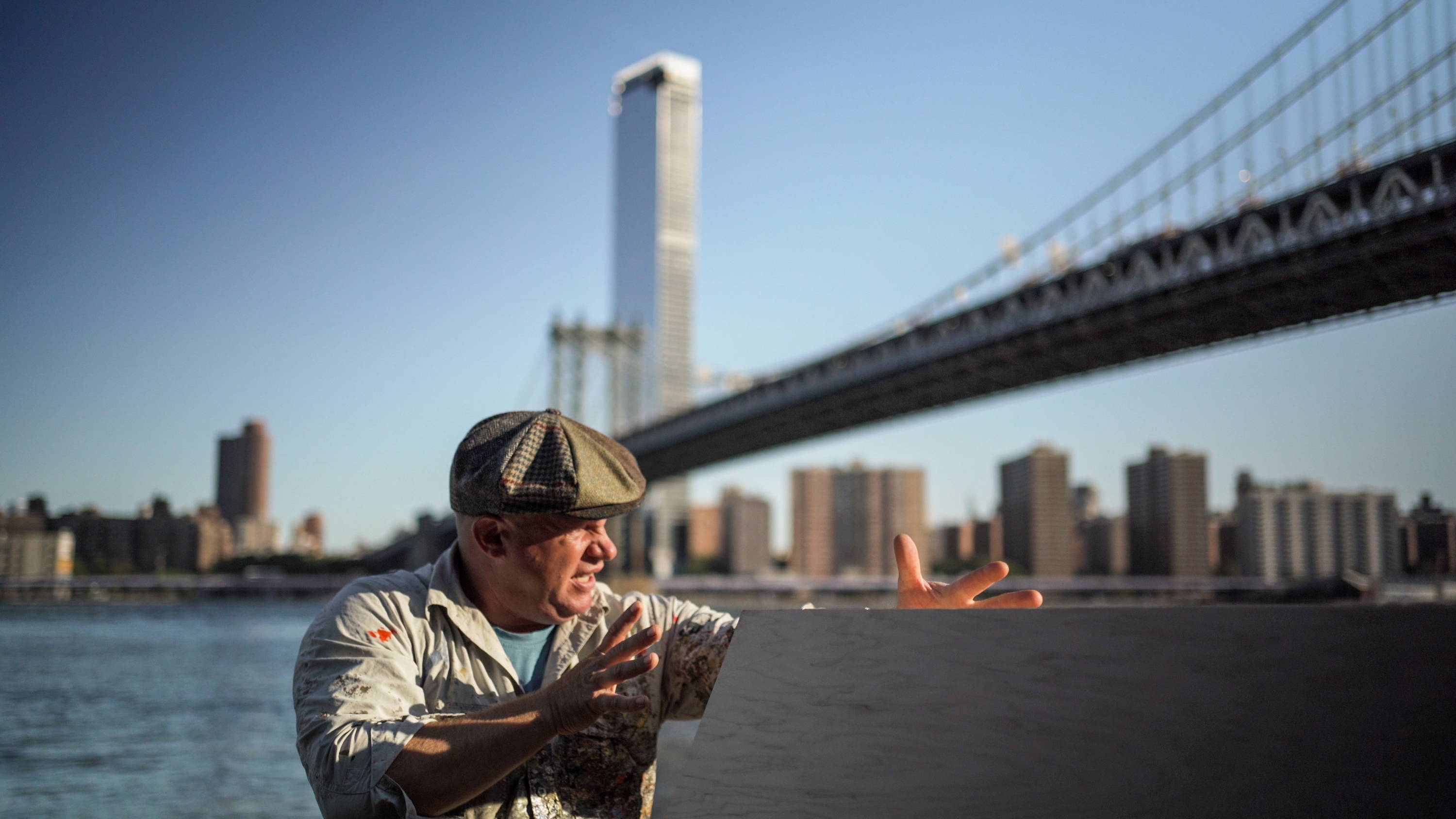 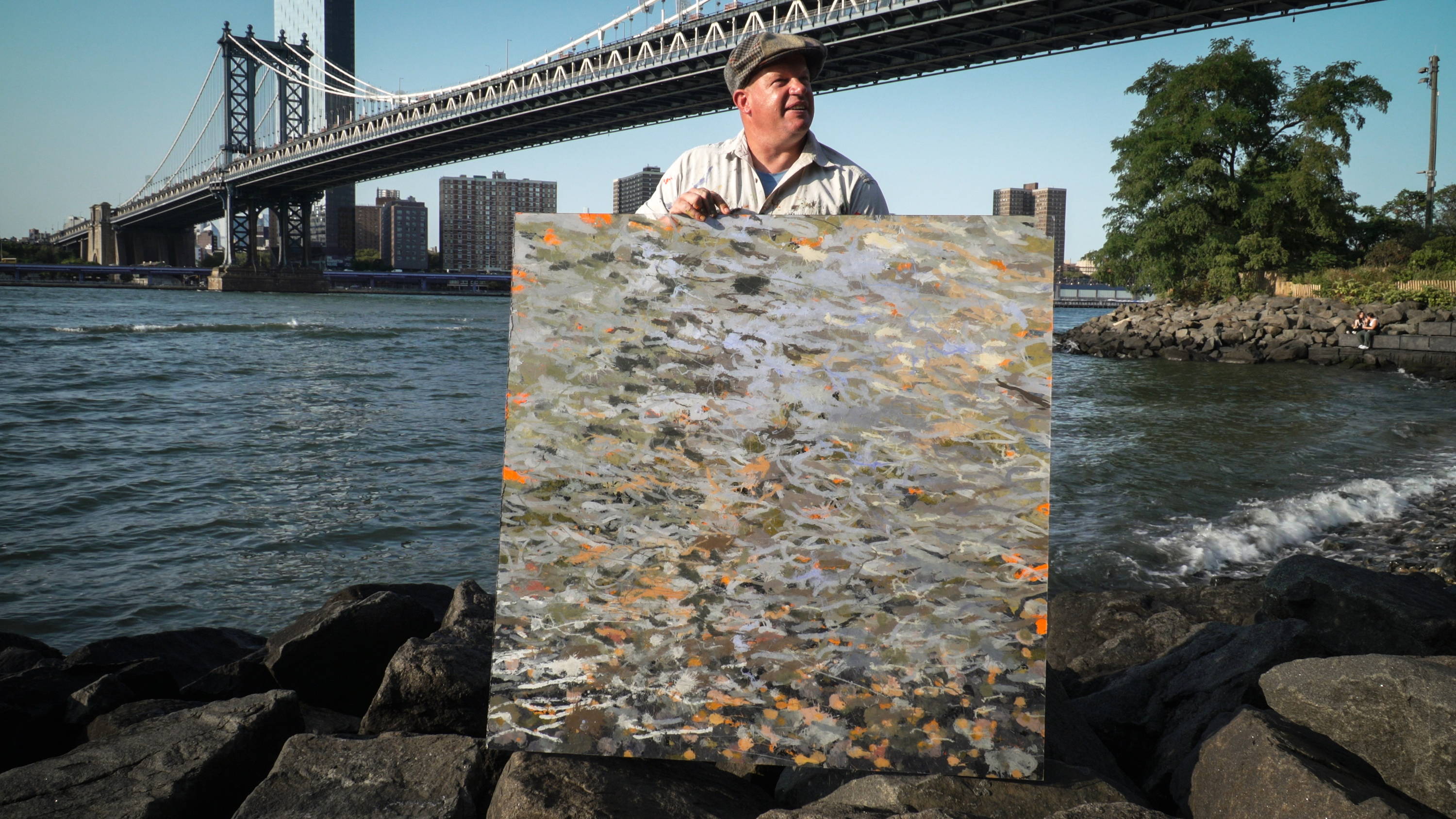 The final dimension of this project comes from a collaboration with South2 West8, the Hokkaido-based pillar of the Nepenthes label. Featuring Ben’s artwork applied to a range of highly technical, functional fishing pieces, this brings both the brand and Ben’s work one step closer to the river, allowing the wearer to experience the joy of nature and chart a new adventure for themselves. 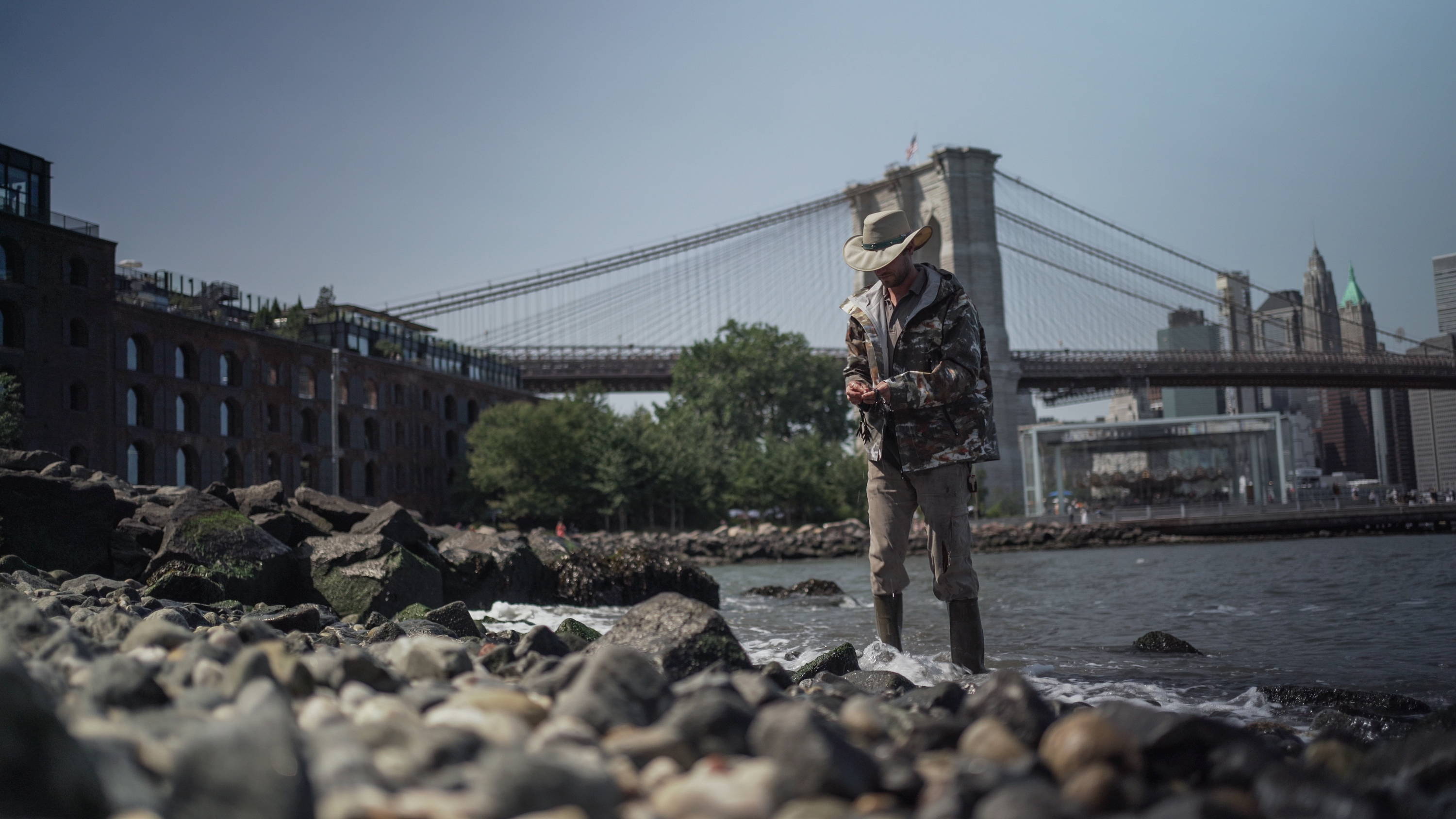 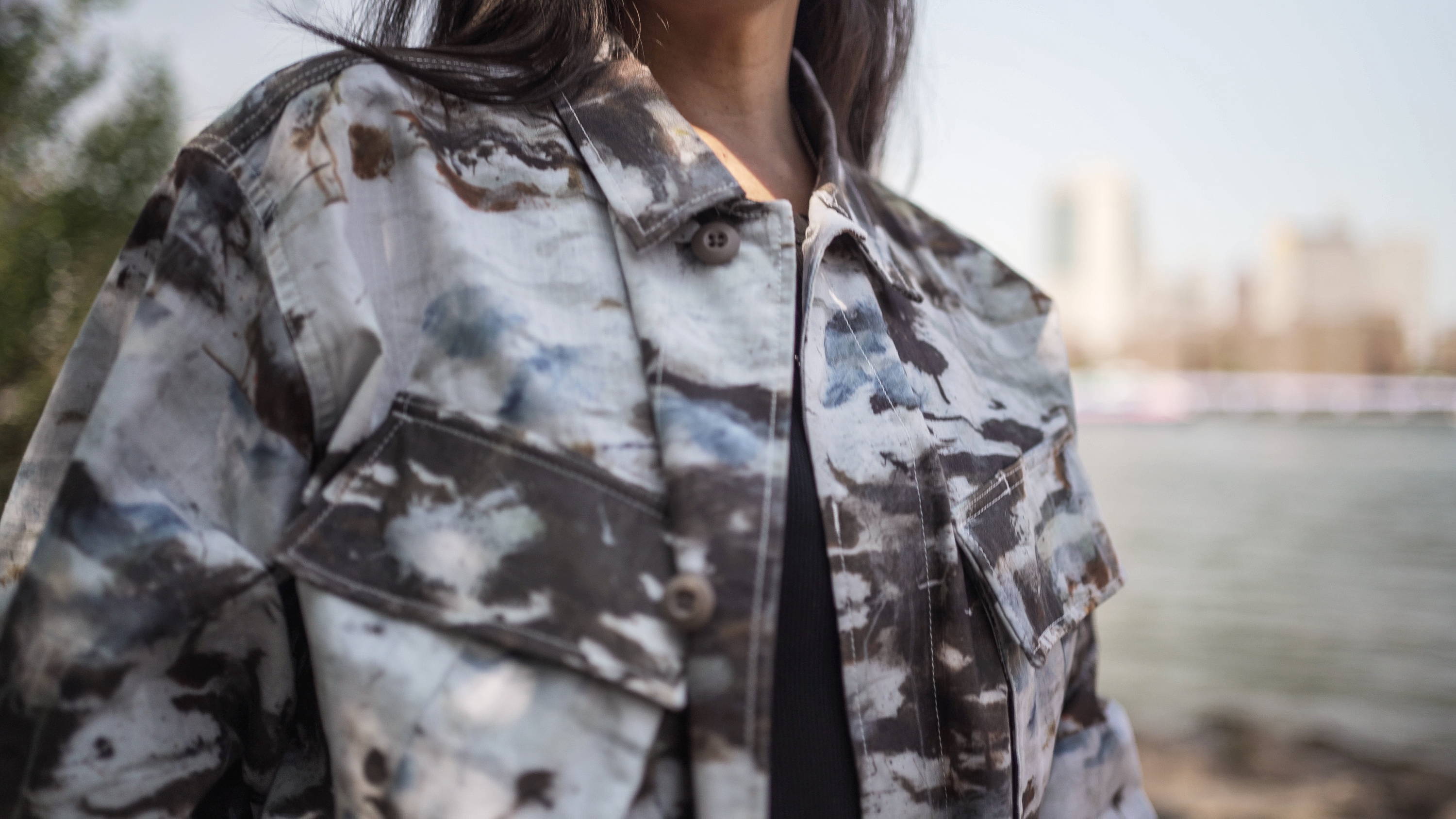 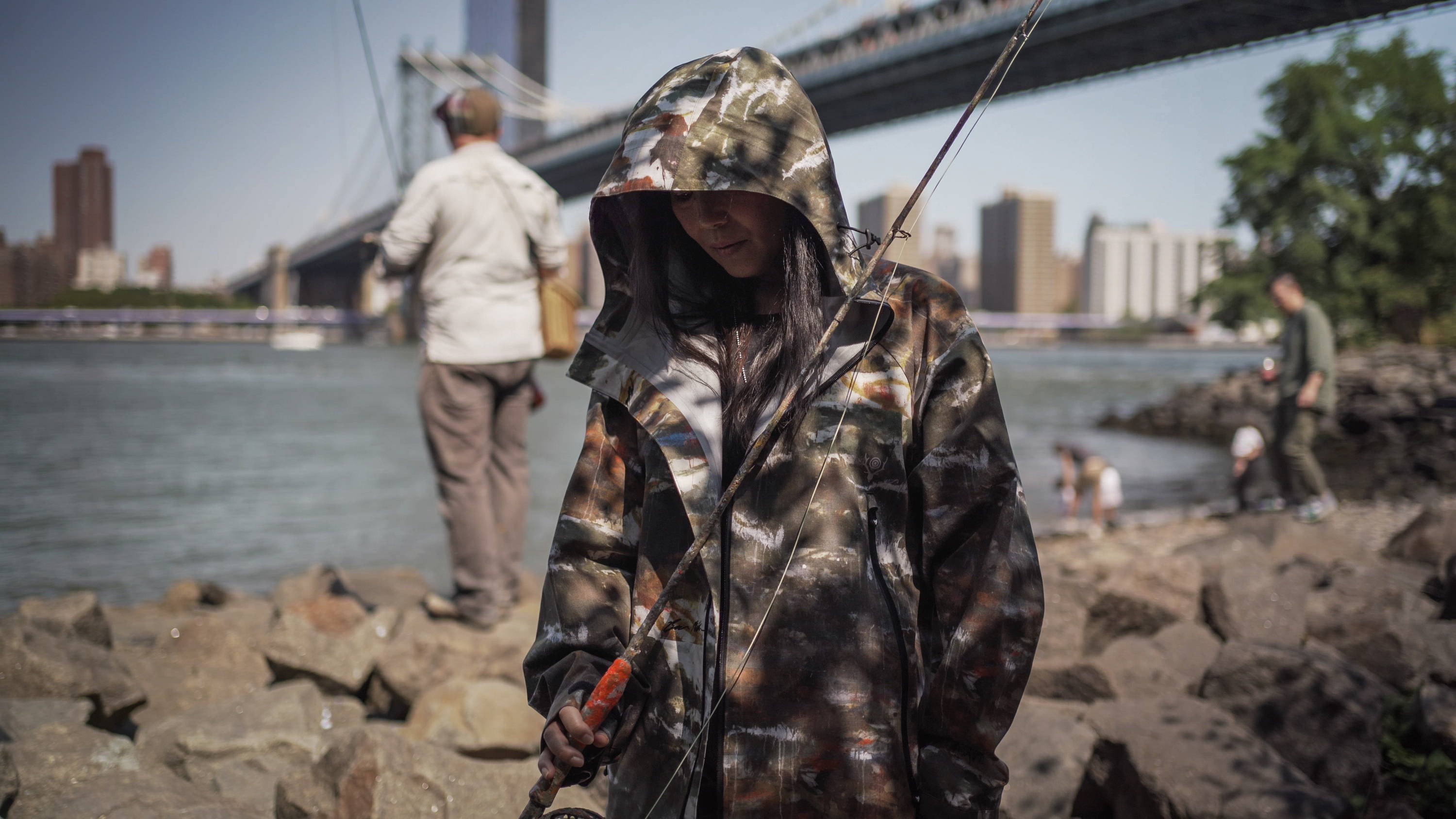 The multimedia Endangered Rivers Project will be on view from Friday, September 16th, in an exhibition at the Nepenthes New York store, concurrent to the release of the Fall 2022 South2 West8 x Ben Miller collaborative clothing line. 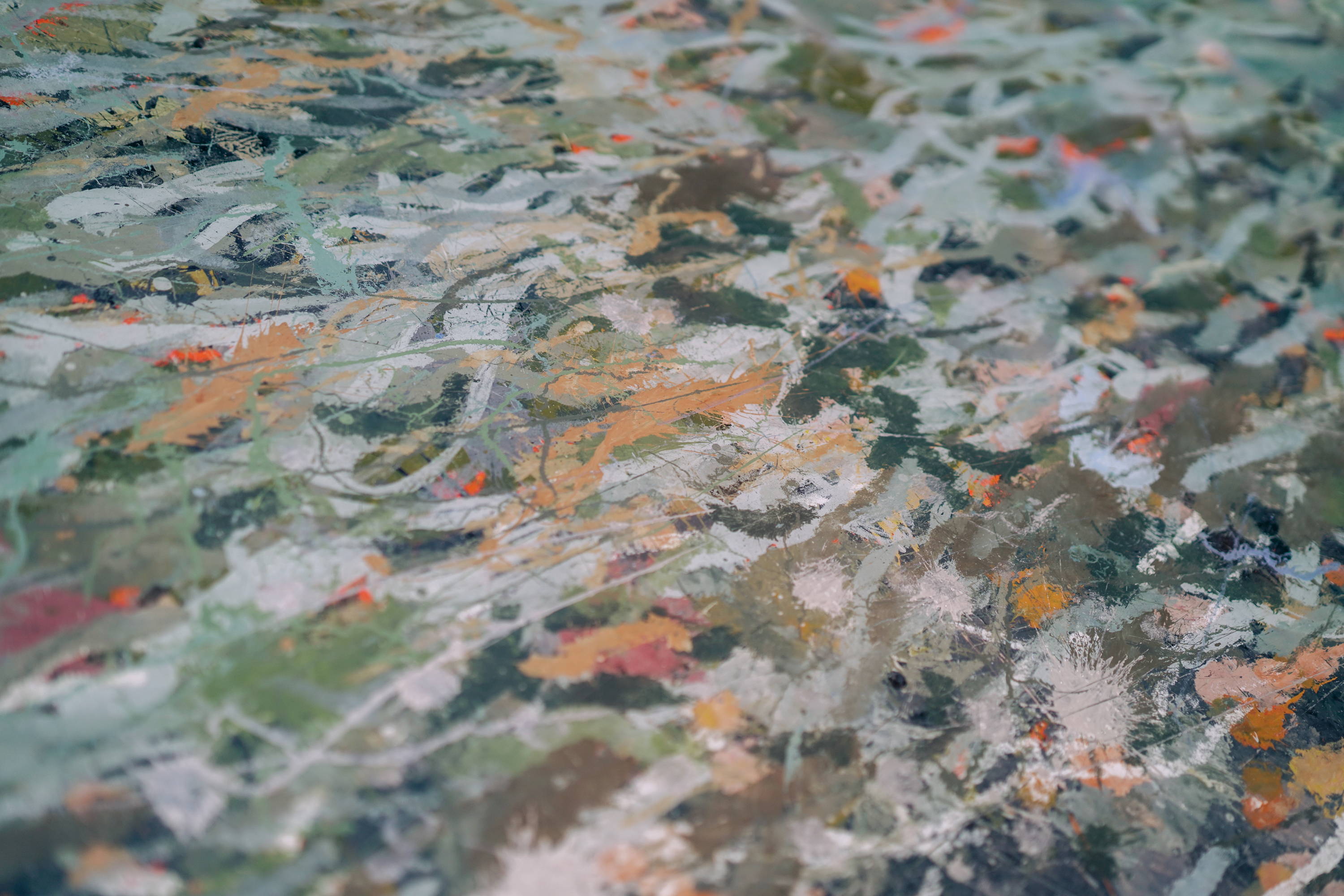 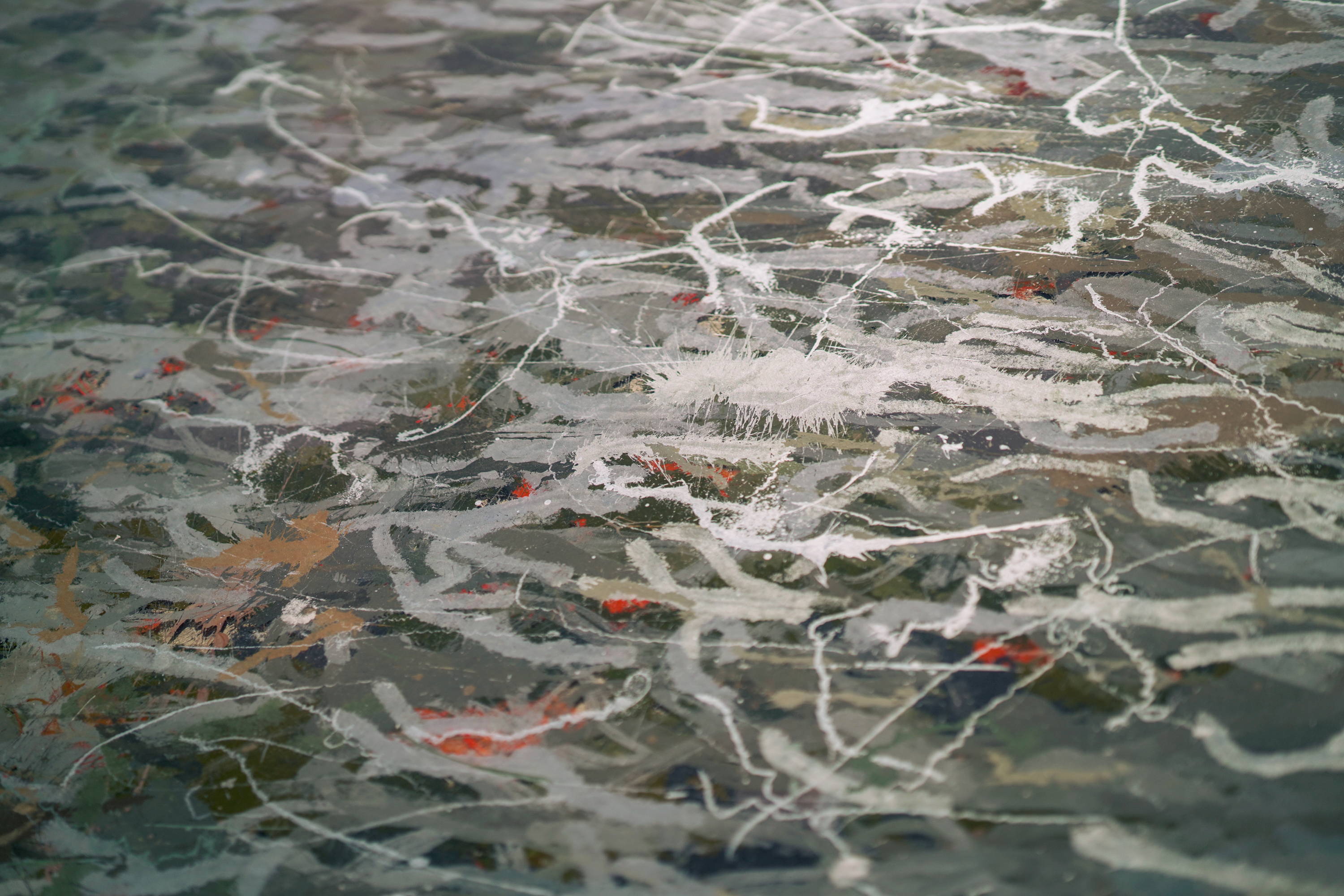 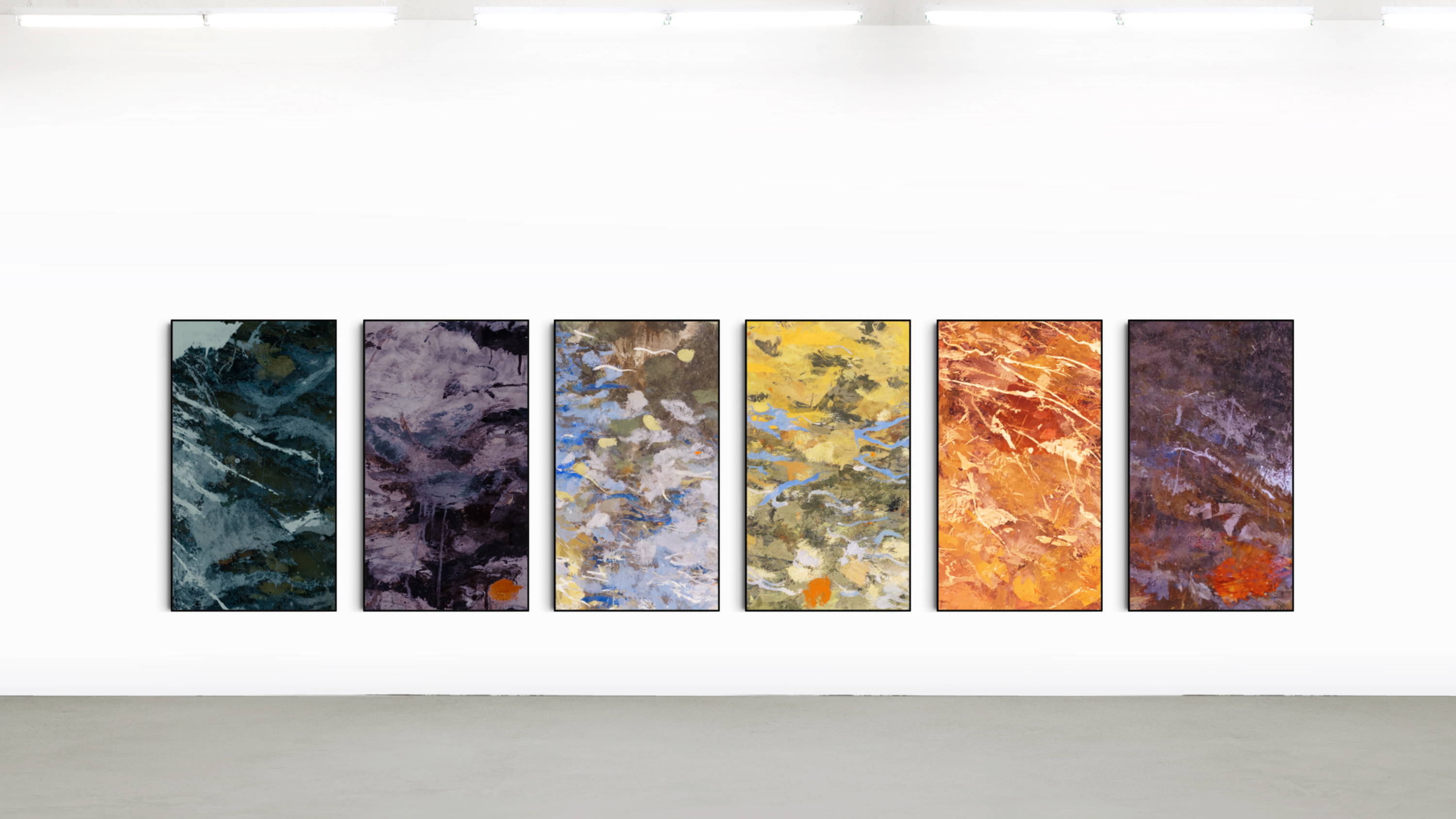